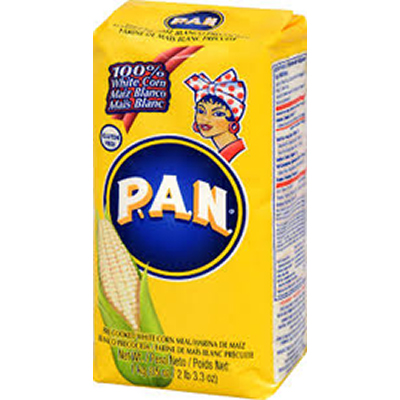 Harina P.A.N. (Producto Alimenticio Nacional) is the first brand of boiled maize flour in Venezuela. The brand itself became a synecdoche, as even with other large competitors in the market, it is used as a noun to indicate any similar maize flour. This flour is similar to the main ingredient of the Italian polenta.

Harina PAN is used to make the maize flour dough also known as “masa de arepa” or “masarepa”, which is used to make Venezuelan dishes such as arepas, hallacas, empanadas, and bollos. Also used in to prepare several Colombian dishes as well. Harina PAN is found in varieties made from white and yellow corn. It contains no additives and is considered suitable for those with restricted diets.  (Wikipedia)