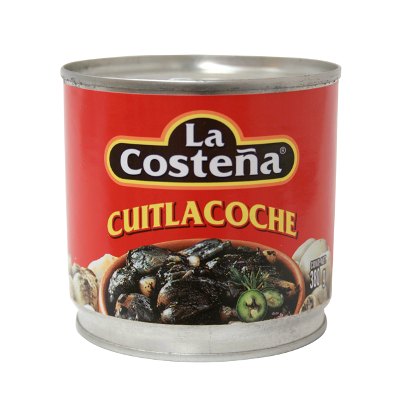 It is most popular in Mexico, where it is known as huitlacoche (, pronounced whee-tla-KO-cheh ) and can be regularly found as an option in meals. The consumption of corn smut originates from ancient aztec cuisine and is still considered a delicacy in Mexico, even being preserved and sold for a significantly higher price than corn.

For culinary use, the gall are harvested while still immature — fully mature galls are dry and almost entirely spore-filled. The immature galls, gathered two to three weeks after an ear of corn is infected, still retain moisture and, when cooked, have a flavor described as mushroom-like, sweet, savory, woody, and earthy.

USES:
It is most commonly used as a filling in quesadillas or omellettes, but it is also used in high profile fine dishes, soups,crepes and/ or as a side dish.

Over heat, the huitlacoche leaks an inky liquid, turning the mixture black, and gradually cooks down to a puree. It can also be sauteed in butter or oil.